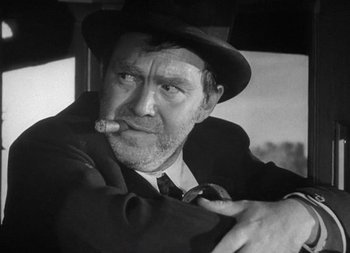 He is widely regarded as one of the greatest character actors to ever live, carving out a spectacular career that encompassed stage, film, radio, and television and spanned the entirety of The Golden Age of Hollywood. He never played the lead, but if you needed to cast a brash Irishman or a sidekick for The Hero, Mitchell was your first choice.

Mitchell was born and raised in Elizabeth, New Jersey. His father and brother were newspaper reporters, but after briefly trying his hand at that profession he soon gravitated to acting, making his stage debut in 1913. He made his first film appearance in 1923 but didn't act in movies again until 1936, when he appeared in the screen adaptation of the Pulitzer Prize-winning drama Craig's Wife. The next year he landed a prominent part in Lost Horizon, which made him a star and was also his first collaboration with director Frank Capra. Mitchell soon rocketed to spectacular success. In one year, 1939, he appeared in five of the best films Hollywood ever made in that era: Stagecoach (as the alcoholic doctor), Gone with the Wind (as Scarlett's alcoholic father), Mr. Smith Goes to Washington (as a hard-drinking reporter—sense a theme?), the most famous adaptation of The Hunchback of Notre Dame, and Only Angels Have Wings. Stagecoach earned him an Academy Award for Best Supporting Actor.

1946 brought the film he's probably most famous for, It's a Wonderful Life, wherein he played George Bailey's alcoholic (again) Uncle Billy. In High Noon he appeared as the cynical mayor who tells Gary Cooper to give up and run for his life. As the studio system declined in the 1950s Mitchell started to work more on the stage and in television, and wound up winning an Emmy and a Tony to go with his Oscar, thereby capturing the coveted Triple Crown of Acting. His final film before his death from abdominal cancer was Pocketful of Miracles, which was also the final film for Frank Capra. It wasn't Mitchell's last acting gig, though; before his death, he originated the role of Lt. Columbo on stage.