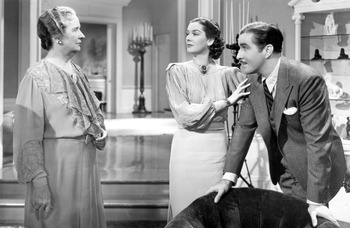 Harriet Craig is the wife of Walter Craig, an upper-class Manhattan businessman. They live in a household that consists of Walter's aunt Miss Austen, and their servants Maizie and Mrs. Harold. Harriet is a domineering and shrewish wife, bossing the servants around, freezing out Walter's friends, and dominating her meek husband as well. She is every bit as cold to her niece Ethel, who has arrived at the Craig household in emotional distress about her mother, Harriet's sister, who is in a hospital with heart disease. Further stress is brought into the home when it appears that Walter may be implicated in a scandalous murder case.

Craig's Wife won the Pulitzer Prize for drama. It was adapted into film three times: a silent version, a well-regarded 1936 version that was a Star-Making Role for Rosalind Russell (directed by Dorothy Arzner, practically the only woman working as a director in Hollywood in the 1930s), and more loosely in 1950 as Harriet Craig with Joan Crawford.