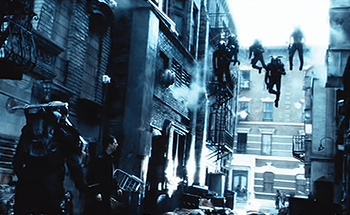 "I used to like the color blue. Now, it's dead to me. Cram it, Smurfs. Piss off, ocean. Screw you, sky."
— RiffTrax on Battlefield Earth
Advertisement:

Blue is the most common favorite color in the world. As a result of being the natural color of the sky, it's universally known to calm and ease. But like any color, if it overwhelms a scene, it can instill negative feelings, in this case a cold and harsh mood. A subtrope of Mood Lighting and Color Wash, common in Science Fiction and Forensics shows, shots are suffused with vaguely blue lighting. This is usually complemented by stark, overly bright desk lamps. Occasionally this infects outdoor scenes, making sunny days look more overcast; this should not be confused with the dark blue camera filter used in shooting "day for night".

A low-intensity version of the effect can be produced by shooting a scene lit with daylight-balanced light on film (or its digital equivalent) that is balanced for incandescent (tungsten) lighting. Daylight has more blue than incandescent indoor lighting, but typically has less than some fluorescent lighting used in offices, which may be part of where the trope originated. In the early '80s, HMI-lighting (strong lights, with daylight temperature) came and was often used outside, mixed with regular bulbs, giving them a strong blue tint (as they were bluer than they are today), which is often seen in the early '80s. Today it still remains for moonlight, as otherwise it would be hard to separate from daylight, however often in a much subtler way.

Although this is a good way to cover up a lower-budget set, the light can sometimes become glaring and/or induce too many shadows.

The rise of Orange/Blue Contrast made this nearly ubiquitous in mainstream movies and television throughout the 2000s and early 2010s; it seems to have peaked since then. Contrast Warm Place, Warm Lighting, when orange or yellow lighting makes a place look hot — but like this, can also make it look ill.