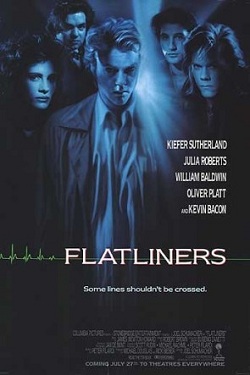 Is there a pulse...? Or a point?
Advertisement:

Flatliners is a 1990 movie directed by Joel Schumacher and starring Kiefer Sutherland, Julia Roberts, Kevin Bacon, William Baldwin and Oliver Platt as medical students experimenting with near-death experiences. In the course of their experiments, they accidentally bring back the ghosts of their past, in the form of vengeful entities that torment them, forcing them to confront their past mistakes and try to figure out a way to send them back where they belong.