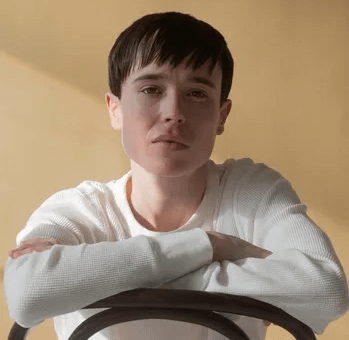 "I've always been drawn to stories and telling them; whether it was through being a part of theater when I was a little kid, or film, or with music, there's just been an innate desire to feel that connection."
Advertisement:

He's best known for playing Kitty Pryde in the X-Men film series as well as for his breakthrough roles in Hard Candy and Juno. More recently, he has also played Viktor Hargreeves/the White Violin on The Umbrella Academy.

Page came out as transmasculine and queer in 2020, stating that he uses he/they pronounsnote Page had previously come out as a lesbian in 2014, when he was still presenting as female. He married dancer and choreographer Emma Portner in 2018; the pair divorced in 2021.

This actor's works provide examples of: