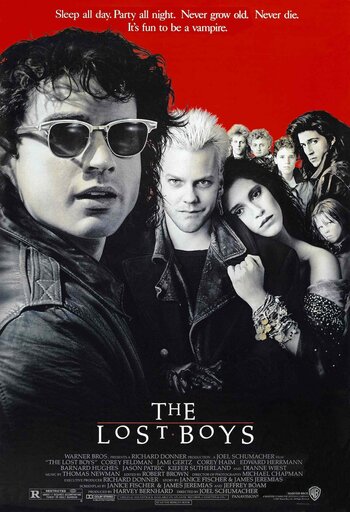 Sleep all day. Party all night. Never grow old. Never die. It's fun to be a vampire.
"One thing about living in Santa Carla I never could stomach. All the damn vampires."
— Grandpa
Advertisement:

The Lost Boys is a 1987 vampire movie with all the trimmings, directed by Joel Schumacher and starring Jason Patric, Corey Haim, Kiefer Sutherland, Dianne Wiest, Alex Winter, and a few other people, including Corey Feldman and Jamison Newlander as the Frog brothers.

Recently-divorced mother Lucy Emerson (Wiest) and her two sons move to Santa Carla, California. Older son Michael (Patric) soon falls in with a gang of bikers led by David Powers (Sutherland), all of whom turn out to be vampires, while his kid brother Sam (Haim) befriends a couple of seemingly insane comic store assistants obsessed with hunting vampires (not that they've ever met one before). After sharing a mysterious drink with David, Michael begins turning into a vampire, and it is up to Sam, with the help of the Frog brothers, to save him.

Followed no less than twenty-one years later by a Direct to Video sequel, Lost Boys: The Tribe. Chris Emerson, a young disgraced former surfing pro, and his younger sister Nicole move to Luna Bay to live with their aunt following the death of their parents. Nicole falls for the enigmatic Shane Powers, another former pro-surfer who "mysteriously vanished" from the circuit. Turns out, it was because he became a vampire. Shane turns Nicole into a vampire, and Chris sets out to save her. Oh, and he enlists the help of Edgar Frog. The movie stars Autumn Reeser, Tad Hilgenbrink, Angus Sutherland, and Corey Feldman, with Corey Haim returning as Sam Emerson in a mid-credits cameo and two alternate endings, and Jamison Newlander returning as a now-vampiric Alan Frog in the alternate endings.

A second Direct-to-Video sequel, Lost Boys: The Thirst, was released in 2010. Vampire-romance novelist Gwen needs Edgar Frog to find her brother, who went missing after getting sucked into a series of underground raves called 'X Parties', held by an enigmatic spinner named DJ X. In a last, frantic message, he mentioned being given a new party drug known as the Thirst, which Edgar identifies as really being vampire blood. With the next X Party only days away, Edgar is faced with the threat of an army of vampires unless he can stop DJ X and save Peter — but DJ X isn't just a vampire, he's the Alpha Vampire, the ultimate head vampire, and someone Edgar's going to need help to defeat. Edgar hopes to recruit his reclusive brother, who's dealing with his own dark past. The movie stars Corey Feldman and Jamison Newlander as the Frog brothers, and Tanit Phoenix.

There is also a four-issue comic book series, Lost Boys: Reign of Frogs. Published by Wildstorm, the series is set between the first two films and explains why Edgar is working alone by the time The Tribe starts and how Shane became a vampire, as well as the fate of several other characters from the films, some of whom are never mentioned in The Tribe. Another comicbook series called The Lost Girl was published by Vertigo in 2016, being the closest adaptation of Joel Schumacher's plans for a never-realised Lost Girls sequel.

A TV series was in the works at The CW for the 2018 season, but has wallowed in Development Hell. Helmed by Rob Thomas, it will be an anthology series with each season set during a different decade.