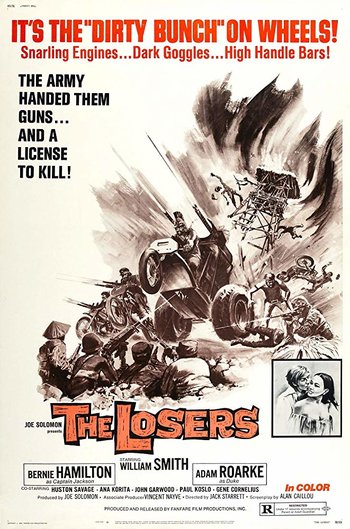 "Now the Army Has Its Outlaws...In the Most Savage Action Picture of All Time!"
Advertisement:

The Losers is a 1970 American action war movie.

It's The Vietnam War, and America is in the midst of the bloodshed. During a diplomatic mission to Cambodia, an agent is captured by the Chinese Army stationed there. Due to the agent being held on neutral territory the military can't enter, the US government hires an outlaw biker gang to rescue the agent. Placing machine guns, grenade launchers and armor on their choppers, the bikers ride into 'Nam to wreck the place.

Not to be confused with the comic, the film based on it the comic, or Nam Angels, an unrelated film with a similar premise (though it should be noted that The Losers has also been released as Nam's Angels, note the apostrophe).