Film / I Drink Your Blood 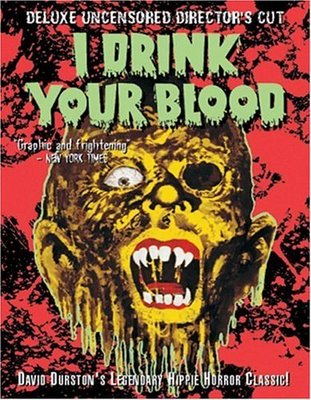 "Let it be known, brothers and sisters, that Satan was an acid head."
Advertisement:

I Drink Your Blood is a 1970 exploitation horror film directed by David E. Durston.

A coven of eight psychopathic Satanist hippies have descended upon the tiny backwoods town of Valley Hills, which is all but deserted due to the nearby construction of a dam. After beating up and raping a local girl for spying on one of their rituals, the girl's grandfather marches over to the abandoned hotel they're shacking up in to interrogate them; but they beat him up too and force feed him LSD. The girl's little brother and the grandfather's grandson, a little boy named Pete, takes revenge by shooting a rabid dog, extracting some of its blood and injecting it into some meat pies. He then feeds those pies to the hippies, and they go rip-roaring insane. Nuff said!

Notable for being screened as a double-feature with I Eat Your Skin, which somehow is a far lesser-known film.