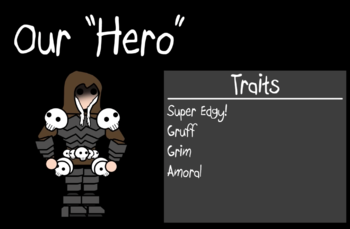 Where are the heroic traits?
"According to a loose enough definition of 'hero', we qualify. Well, more or less. The point is that good deeds were done and we were nearby."
— Red Mage, 8-Bit Theater

Fictional heroes tend to be a diverse bunch, but most have one thing in common: a morally positive motivation. Even morally questionable heroes usually are at least partially motivated by a genuine concern for others, desire for justice, belief in playing by the rules, etc.

The Nominal Hero is the exception to this rule. While at least technically on the side of good, their motivations are neutral at best.

So why are they on the side of good? Usually, it's one of the following:

This type of hero is rarely averse to working alone, with other heroes. On a team of otherwise conventional heroes, they'll often be in an Enemy Mine, Sociopathic Hero, or Token Evil Teammate role. Other heroes may only work with them because they could use all the help they can get, or specifically to keep an eye on the hero-in-name-only so that they don't become a more serious threat.

In terms of sympathy, most Nominal Heroes are Noble Demons. Many other tropes about questionable heroes can overlap with Nominal Hero, but most are not true subtropes:

Note: This is for In-Universe characterization. Subjective/Audience Reaction interpretations go in Designated Hero.

TWA recommends a hero with no heroic qualities at all in a grimdark story.

Alternative Title(s): Hero In Name Only

TWA recommends a hero with no heroic qualities at all in a grimdark story.