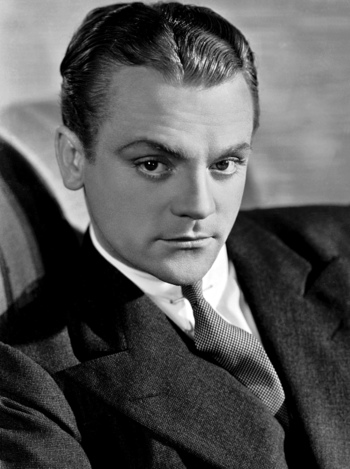 The original Public Enemy.
"You dirty rat!"
— Not James Cagney note  The quote originally spawned from the 1932 film "Taxi!", and while he technically said the words, the line In question was actually "Come out and take it, you dirty yellow-bellied rat, or I'll give it to you through the door!."
Advertisement:

James Francis Cagney (July 17, 1899 – March 30, 1986) was an American film actor most famous for his gangster roles in the 1930s and '40s, as well as for his alleged catchphrase. He starred in some of the best gangster pictures ever made, including Angels with Dirty Faces, White Heat, The Roaring Twenties, and The Public Enemy, the last of which unfortunately is mostly remembered for a scene in which he shoves half a grapefruit into Mae Clarke's face.

What isn't commonly known is that Cagney began his career as a song-and-dance man. Even after he was type cast as thugs, he leaped at chances to act and dance

in musicals whenever he could.

His tough-guy persona wasn't all for show, though; Cagney staggered Warner Bros. by walking off the lot when the studio failed to honor his contract. His example set a precedent for fairer studio practices. On the other hand, Cagney's activism landed him hot water; he was even branded a Commie in some circles, although his iconic role in Yankee Doodle Dandy dispelled such rumors pretty quick.

Michael J. Fox is one of his biggest fanboys, for obvious reasons. He hosted a TV special on Cagney's life and times entitled Top of the World.

Cagney's life story was recently immortalized in an off-Broadway musical simply titled Cagney, following his humble beginnings as a dock worker, his success and eventual falling out with Warner Bros., up to his acceptance of a lifetime achievement award from the American Film Institute.