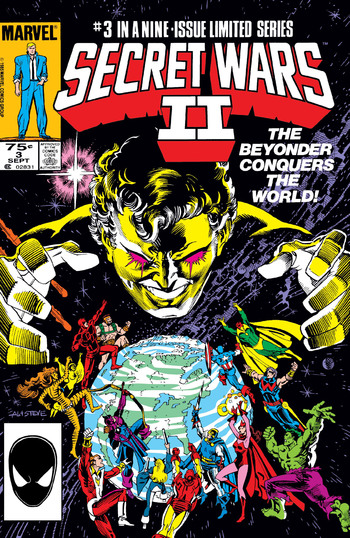 "Beyond time, space, and the myriad dimensions lies another universe, to which our own is as a droplet of water to the ocean. The One Who is All in that other universe has learned of our universe, and of us . . . and he is coming here. Now."
Introduction, Secret Wars II #1
Advertisement:

Secret Wars II is a nine-issue comic book Limited Series and crossover published between 1985 to 1986 by Marvel Comics. It was written by Marvel's then Editor-in-chief Jim Shooter and primarily penciled by Al Milgrom. The series was a sequel to Secret Wars (1984). It tied-in with issues of other Marvel titles, with each "tie-in" featuring a Secret Wars II logo in the top right hand corner to indicate that it was a part of the overall story.

The plot follows the return of The Beyonder, the being who started the first Secret Wars, who comes to Earth in search of enlightenment and inevitably comes into conflict with Earth's metahumans and the cosmic entities that exist in the Marvel Universe. It tries to become human, help people, learn how to love etc. but keeps failing, and his frustration turns him into a menace. He is eventually dealt with, although the heroes also have to prevent the destruction of the planet as a consequence of his actions.