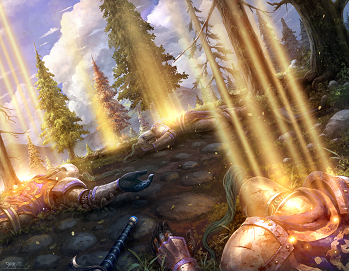 by ChaoyuanXu.
"One after another, eh? Was there a sale on resurrection tech?"
— Gunvolt, Azure Striker Gunvolt

You have a large number of characters who have been killed and you need to bring them back to life for some reason or another?

Then this trope is for you!

Maybe you can ask a powerful healer, pray to a God, or maybe the defeat of the Big Bad spawns a World-Healing Wave which brings everyone he killed back. Most versions of Warrior Heaven also have the dead get back up at the end of the day so they can continue feasting and fighting.

Remember, this is a full resurrection. If you are looking at bringing back a whole bunch of zombies then Night of the Living Mooks is for you. Or if you need help from some allies, but don't have this trope at hand, then the Cavalry of the Dead may be just what you needed.

For a version specific to certain types of Christianity, see Caught Up in the Rapture.