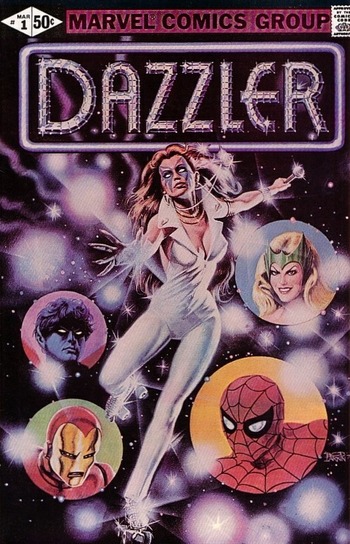 Dazzler is a series published by Marvel Comics in The '80s.

Published from the early to mid 80's, 'Dazzler' was an attempt on Marvel Comics' part to draw a female audience by putting a title on the stands that was half superhero action and part soap opera. Or, at least, that's what the series was like for most of its first two years. Towards the end of its second year it took a turn towards being more soap opera than superhero book. In the series' final 5 issues it made a return to superheroics, with Dazzler's well-known blue costume making it's first appearance in issue 38.

Issue 1 of Dazzler was the first ever "Direct Market Only" comic, giving the book a large hype at the time, since a lot of readers whom bought their comics at newsstands, did not manage to get a copy. There was also a graphic novel published named Marvel Graphic Novel issue 12: Dazzler the Movie, set between issues 34 and 35 of this series. Years later, a special Dazzler one-shot was published, which was an aftermath of the Necrosha-X crossover as well as a special homage to this original series.

Dazzler provides examples of the following: