Deadpool's demonstrative disclaimer of disambiguation:
Hey there, true believers! Unfortunately TV Tropes wants my pages "clear" and "concise" now. I'm only allowed to demonstrate myself in my own domain if I wanna stay the Merc with a Mouth. So don't go putting ol' Wade's examples into first-person here, 'kay?! 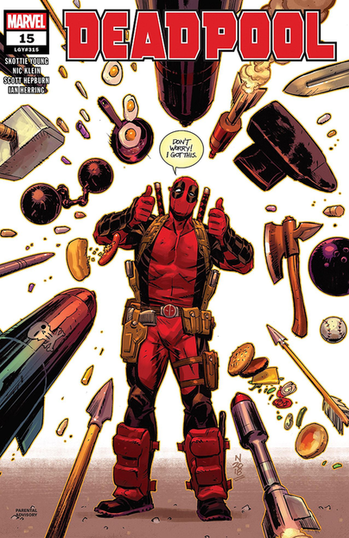 It takes more than weapons, sporting equipment, and clogged arteries to make the Merc with the Mouth shut up.
Advertisement:
"Deadpool-Man! Deadpool-Man! Does whatever Deadpool can! Makes a plan, any size, catches thieves and makes them dies. Look out! There goes the Deadpool-Man!"
— Deadpool, Deadpool vol. 3 #8

The character debuted in 1991 in the final arc of the original volume of The New Mutants, and he appeared in multiple series and two mini-series focused on him before the first Deadpool ongoing series premiered in 1997. Deadpool comic books are defined by the character's dark and surreal sense of humor, frequent fourth wall breaking, pop culture references, violence and mayhem, and explorations of the character's functional immortality and disordered mind. Deadpool comics have varied supporting characters and antagonists depending on the creative and editorial team.

Marvel started heavily featuring the character in 2008, with every month having a Deadpool solo ongoing series, an ongoing series including Deadpool in a partnership or on a team, usually one or more additional mini- or limited series centered on Deadpool, and multiple guest appearances in other series or events. Many of these guest appearances and non-solo series are related to his association with Cable, including their series Cable & Deadpool; mutant teams and characters like the X-Men, X-Force, and Wolverine; and Spider-Man, including the appropriately-named Spider-Man/Deadpool.

A version of Wade Wilson made his film debut in X-Men Origins: Wolverine, portrayed by Canadian actor Ryan Reynolds. After years of development, Reynolds returned as the titular character in the Deadpool films, which are truer to the comic book characterization and adapt Deadpool into a mutant whose violence doesn't mesh well with the traditionally heroic X-Men. Deadpool has also appeared in other characters' animated series, on pinball tables both physical and digital, and in video games, including the Deadpool video game and Marvel vs. Capcom 3.

This page is about plot tropes in the Deadpool comic books. For the character and his personality traits or those of his supporting characters, see the character sheet.

Deadpool mini-series and limited series
Some of these series have their own pages for information and tropes in them:
Deadpool versus series
Deadpool team series

Ilaney: Wolverine says much during one leap, no?
Doctor Bong: Excellent observation, Ilaney... I believe lengthy speeches in mid-leap are a form of mutant power.

Continued by Mrs. Deadpool & The Howling Commandos during Secret Wars.

Vol. 6
The Merc With a Mouth is back from the dead in this new series, written by Gerry Duggan with art by Mike Hawthorne.
Vol. 7
Despicable Deadpool
Tired of being crapped on for trying to be a hero, the Merc with a Mouth resumes his merc ways. His first target? The Man Called Cable! Written by Gerry Duggan and drawn by Scott Koblish; legacy numbering starts at #287.
Vol. 8
See Deadpool (2019)
Vol. 9
See Deadpool 2022

Annuals
Deadpool: Merc with a Mouth
Deadpool Team-Up
Deadpool MAX
You Are Deadpool
Deadpool: The End

When Dopinder reveals that he kidnapped his romantic rival Bandhu and locked him in his taxi's trunk. Deadpool tries to look like he's discouraging him while simultaneously encouraging him to violently kill Bandhu and kidnap Gita.

When Dopinder reveals that he kidnapped his romantic rival Bandhu and locked him in his taxi's trunk. Deadpool tries to look like he's discouraging him while simultaneously encouraging him to violently kill Bandhu and kidnap Gita.