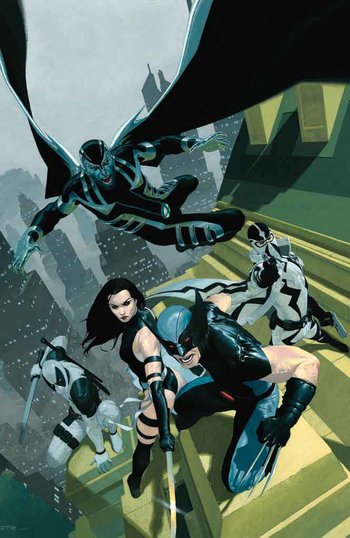 There's one rule: Nobody can know.

"Ain't no man can fight against who he is forever."

Written by Rick Remender, in the aftermath of the Second Coming crossover, the X-Force title underwent another, albeit smaller, relaunch as the Uncanny X-Force. This time, the team is not sanctioned by Cyclops and operates in secret to protect the interests of the still endangered mutant population, under the leadership of Wolverine.

This team's roster consists of previous team members Wolverine and Archangel (the only members retained from the last team), and new additions Fantomex, Psylocke and Deadpool. Later members include Deathlok, the Age of Apocalypse Nightcrawler, and EVA.

While reaction to X-Force vol. 3 was decidedly mixed, Uncanny X-Force has been hailed as a modern classic. The series lasted for 35 issues (December, 2010-February, 2013). Some of its dangling plot threads carried over to Remender's next series, Uncanny Avengers