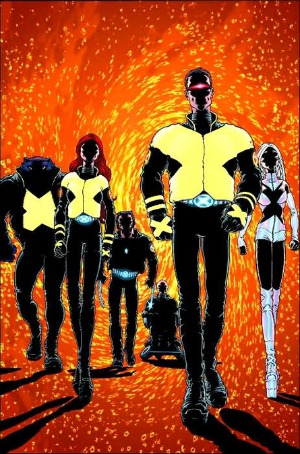 "Are these words from the future?"
—Charles Xavier
Advertisement:

New X-Men (2001-2004) is an American comic book series written by Grant Morrison, which follows the X-Men's "Blue Team" as they attempt to stop several new threats against both mutants and mankind.

The series was a retitling of the then-ongoing second volume of the X-Men series which began in the early 90's, and shared the series' numbering. Morrison, a critically-acclaimed writer known for their high-profile works at DC Comics, was brought onboard to revitalize the title and introduce a number of new story elements. Morrison started as they meant to go on, as the new villain Cassandra Nova directed an army of Sentinels to destroy the mutant island Genosha, resulting in sixteen million mutant deaths and a shake-up to the status quo.

The following arcs introduced several new students at Charles Xavier's school (including Beak, a deformed half-human birdman, Angel Salvadore, a young woman who sports the wings of a fly, the Stepford Cuckoos, and Xorn, a Chinese prisoner who can heal injured people and sports a star inside his helmet), and dealt with more mature themes.

The book resulted in a re-energizing of the franchise, and was critically and commercially acclaimed. However, certain controversial twists were hastily retconned by Marvel after the run due to fan backlash. The series reverted back to the original X-Men title beginning at issue #157.

Not to be confused for New X-Men: Academy X (which later went by New X-Men in it's later issues), or All-New X-Men.