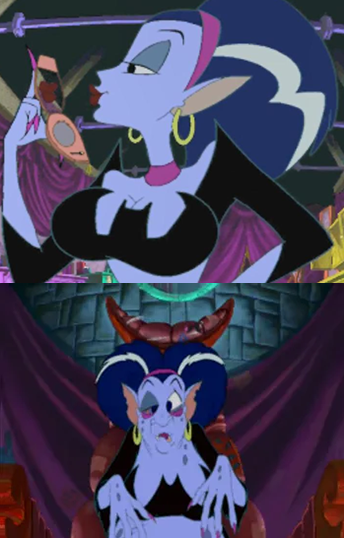 From Ms. Fanservice to Ms. Fan Disservice in the blink of an eye!
There's this character: they're beautiful, and they know it. They might even exploit their charms to their advantage and/or ridicule those who are less attractive than they are. Too bad their beauty is all fake. Underneath all their make-up (or glamour, in more fantastical settings), they're not actually that pretty. In fact, they're usually really ugly; or perhaps they've aged badly, and is hiding their deteriorated appearance because they're not naturally youthful looking.
Advertisement:

Due to the Double Standard that dictates that beauty is required of a woman, expect most examples of this trope to be a woman, or at least a feminine man. Unattractive males aren't usually as concerned about being judged or treated harshly for not meeting certain standards of beauty.

Obviously the inverse of Beautiful All Along. Related to Punished with Ugly, where a formerly beautiful character is disfigured or turned ugly as a punishment, and may overlap if the unmasking of the character's beautiful facade is treated as punishment.

Compare Butter Face, who has a hideous face (which they don't usually hide) but an otherwise alluring body, and may mislead interested onlookers who only caught a glimpse of their silhouette.

Note: Since this trope is often played as an unexpected revelation, many of the examples are spoilers and most of them will be unmarked. You Have Been Warned.