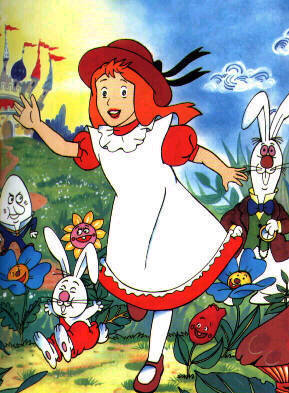 Despite not making much of a splash in Japan or in the USA (both the English and French dubs made it to Canadian TV and the English dub, of South African origin, was also popular in India), the series did prove quite popular in several countries — enough so that the second half of the series was created primarily for those markets. Ultimately only 24 of the 52 episodes aired in Japan.

Many of the same creative team would go on to make The Noozles the following year, another series about a girl and her adventures with a magical animal companion.

Alice's feet get stuck when crossing a chessboard that has been covered in honey.

Alice's feet get stuck when crossing a chessboard that has been covered in honey.