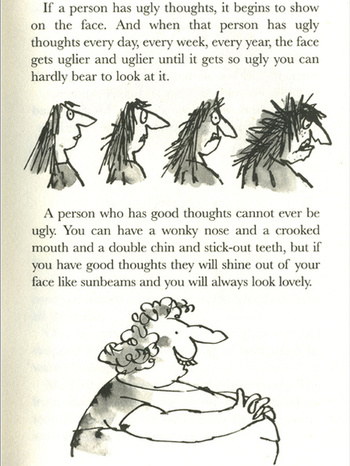 "When in crime one is fully employed
Your expression gets warped and destroyed:
It's a penalty none can avoid;
I once was a nice-looking youth;
But like stone from a strong catapult,
I rushed at my terrible cult —
Observe the unpleasant result!
Indeed I am telling the truth!"
— Sir Despard Murgatroyd, Ruddigore
Advertisement:

When evil makes you ugly, it's often to exhibit the "side effects" of obtaining untold amounts of evil power or of using that power to hurt innocent people. The external form morphs to match the internal form.

Since evil super villains care only about obtaining power (typically at the expense of everyone else), they generally shrug it off when they suddenly age by 100 years, have limbs that they didn't have before, or can't go out in public anymore. This is because these changes usually have no negative effects other than the ugliness. A villain that has aged a hundred years, while he may be no wiser, will somehow avoid being physically hindered by the extra years. The villain with the extra limb will find neat uses for it...

Trying to hide with makeup is sometimes tried, because Makeup Is Evil.

In video games, such transformations may be caused directly by less-than-honorable actions taken by PCs. The transformation may either grow or shrink in intensity the more evil one becomes. See Character Model Karma Meter.

Taken to the extreme, the evil transformation that corrupts the supervillain could do them in.

Sometimes an attempt at this trope fails; the character's new features improve their appearance.

When Beauty Equals Goodness, this is used to mark Face Heel Turns.

Contrast with Evil Is Sexy, Face of an Angel, Mind of a Demon, The Makeover, and With Great Power Comes Great Hotness. See also Beauty Equals Goodness, where beauty is seen as proof of being good regardless of whether it's true.

Use of his evil Daoist magic has made the Daoist deteriorate and he used a silk veil to conceal it.

Use of his evil Daoist magic has made the Daoist deteriorate and he used a silk veil to conceal it.