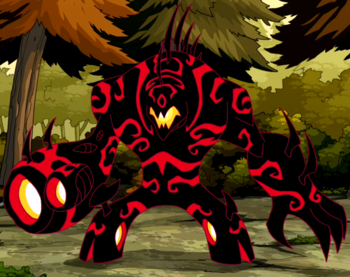 Voiced by: Corey Burton
"Evil? No... VISIONARY! I feel power building inside me! I see a world that only I can create! It was Azmuth who thought me flawed! He gave me the name Malware... But I am not the flawed one. It's all the rest that are inferior! They bend and stretch... mimic and manipulate what others have created... I do not upgrade others' creations; THEY UPGRADE ME! And I will upgrade myself with Azmuth's greatest creation!"

Malware is a psychotic Galvanic Mechomorph who serves as the main antagonist in the first 2 arcs of Omniverse. He was an incomplete Galvanic Mechamorph created accidentally by Azmuth during the development of Galvan B by shutting down the Helix (the device that created the original Galvanic Mechamorphs) right while he was being produced. As a result, Malware was born corrupted, with the ability to absorb technology and gain its ability instead of upgrading it. Azmuth spent years developing a new Helix in order to cure him, but Malware eventually lost patience and stole it from him, using it to upgrade himself into a form that apparently eliminated his need for energy while retaining his old abilities. After that, he vowed to absorb the Omnitrix in order to gain its abilities. After destroying Ben's Feedback form, he was seemingly killed when Ben overloaded him with the Omnitrix. Somehow, he survived and returned to menace Ben years later. 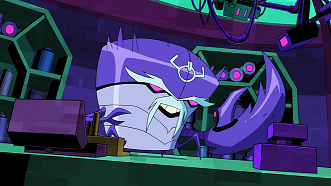 Voiced by: Eric Bauza
"Honestly, Galvan and their superiority complex. Dullards! The lot of them... especially that imbecile Azmuth! This will finally prove, once and for all, that Cerebrocrustacean are smarter than Galvan, and that I, personally, am far superior to that arrogant amphibian!"

A Cerebrocrustacean (Brainstorm's species) scientist who is responsible for the creation of Khyber's Nemetrix. Dr. Psychobos has a strong despise of the Galvan specie as a whole, and especially Azmuth, who he has a personal rivalry with (though Azmuth apparently doesn't care). In an attempt to prove his species are the smartest in the universe, he teamed up with Malware in order to get the Omnitrix blueprints, so he could then use it to create his own, superior version of the Omnitrix. This resulted in the Nemetrix, a feral version of the device that could only work on creatures of limited intelligence. He and Malware then proceeded to hire Khyber to collect the DNA required to make it work. 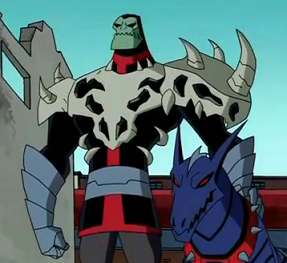 Voiced by: David Kaye
"You do well, old friend. But this Ben Tennyson is more powerful than I imagined. And resourceful. He will be our greatest trophy. Khyber the Huntsman promises it."

An alien Egomaniac Hunter who seemed to serve as the main villain in the first season of Omniverse, but was really The Dragon to Malware, the true main antagonist. Khyber is accompanied by an alien dog-like creature known as an Anubian Baskurr which he equips with the "Nemetrix", a device similar to the Omnitrix that allows his pet to turn into various predatory species. He went to Earth following rumors about Ben's heroic acts and sees the boy as a worthy prey to add to his trophies. 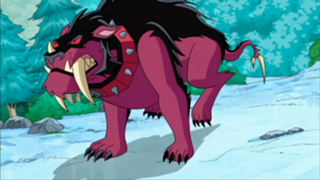 After abandoning his previous pet, Khyber obtained a new pet. It is a Panuncian from the planet Hathor, the homeworld of Ditto's species, the Splixsons, and is their natural predator. 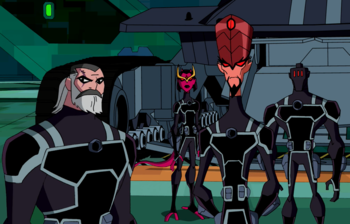 From left to right: Phil Billings, Swift, Servantis and Leander

The secret Black Ops branch of the Null Void Plumbers who went rogue. 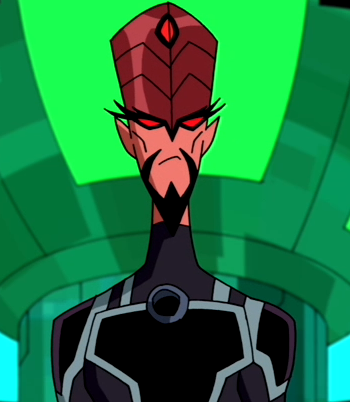 The leader of the Rooters. 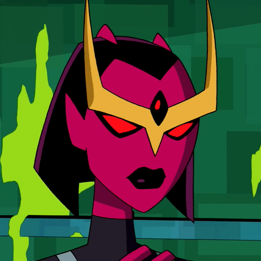 Alternate Bens that Vilgax and Eon worked to corrupt to have their own army of Omnitrix-wielders. 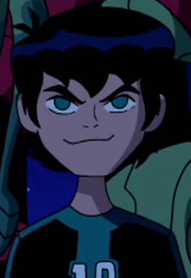 The first evil alternate Ben to be introduced. He is the first to find No Watch Ben and attack him, soon allowing the others to follow. 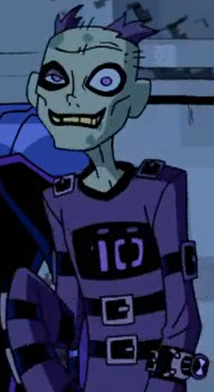 An alternate version of Ben from a Zombie Apocalypse timeline. 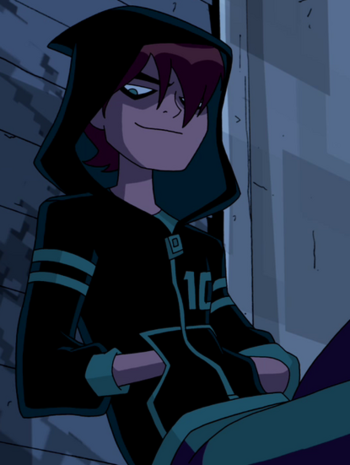 An alternate version of Ben who appears to be goth. 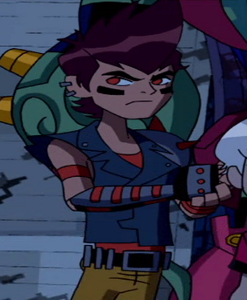 An alternate version of Ben who used the Omnitrix to enslave and seize power rather than become a hero. He is a tyrant and warlord in his dimension. 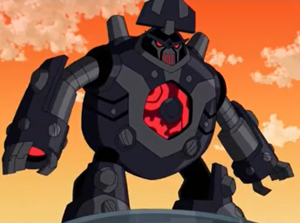 The antagonist in the Time War arc. He was first mentioned in "Ben Again", and makes his debut at the end of "Fight at the Museum". He is a Chronosapien (Clockwork's species). 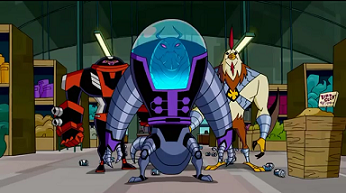 A gang of alien criminals introduced as Psyphon's henchmen. There are many members focused, few of them getting actual development, but three of them, Liam, Fistina and Bubble Helmet, are frequently seen working together.

Voiced by: Aziz Ansari (Omniverse), Gunnar Sizemore (Reboot)
"I was richer than you, I was smarter than you... I should have been running that school!"

Billy is an old classmate of Ben's back when he was eleven. He's a genius kid from a rich family who developed a huge complex toward Ben, feeling like Ben was getting all the attention instead of him. Eventually, his jealousy led him to attempt to get rid of him by sucking him to Dimension 12. Due to attacking him in his Diamondhead form, however, he ended up zapping himself and trapped himself to the age of 11 as a result due to time working differently here. Growing smarter with age, he eventually found a way to come back on Earth to attempt revenge on Ben. 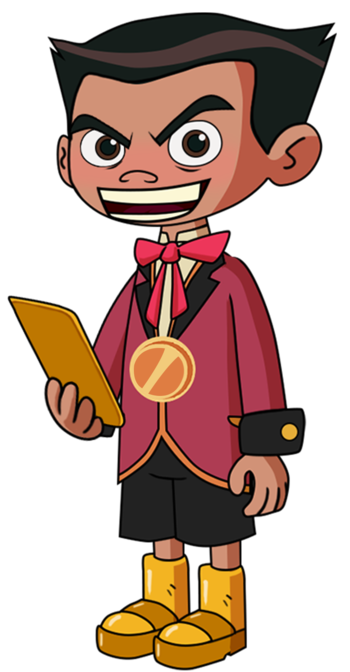 A human crook with a rather personable attitude. 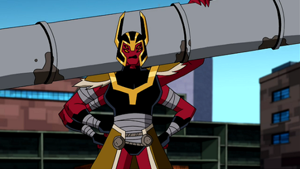 A female Tetramand Princess who Kevin met during the time between the original series and Alien Force. In an attempt to get a piece of technology from the Tetramands, Kevin agreed to become Looma's fiancé so he could get said piece as a wedding gift. This came back to bite him back when she arrived three years later to get married to him. In order to avoid it, Kevin pulled out a Batman Gambit that led Ben to become Looma's fiancé instead of him. 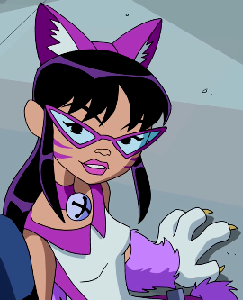 Nyancy Chan is a human female with the ability to hypnotize cats or cat-like creatures into doing her bidding. 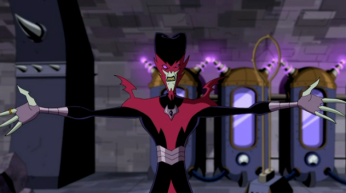 Voiced by: David Kaye
"I must feed."

Lord Transyl is the former Lord of Anur Transyl, and a member of the extinct Vladat species. He was resurrected by Zs'Skayr. He has the ability to create creatures called Corrupturas, which enable him to control anyone they attach themselves too. He is also the genetic source for Ben's Whampire transformation. 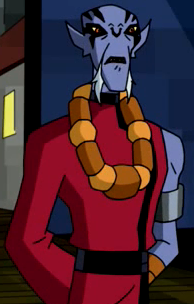 After becoming a Cyborg 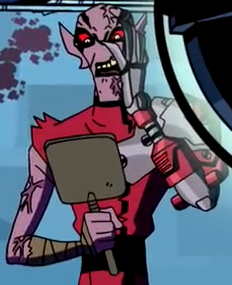 A Revonnahgander fond of the old ways of his planet, and a master of Ravonnah Kai, their marital arts (whom he taught to Rook Blonko before he left.) A cantankerous elder, he particularly hating technology, outsiders, or those that have betrayed the old way of life. 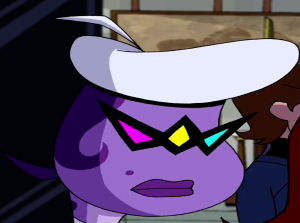 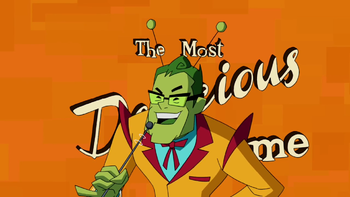 A galactic personality and host of the galaxy-wide hit "The Most Delicious Game" where every woman a contestant knows compete for his hand in marriage. Three guesses as to who he shanghais to be his latest contestant. His species is a Pugnavore, a race of green humanoids who feed off of conflict. Certainly explains the title of his show better. 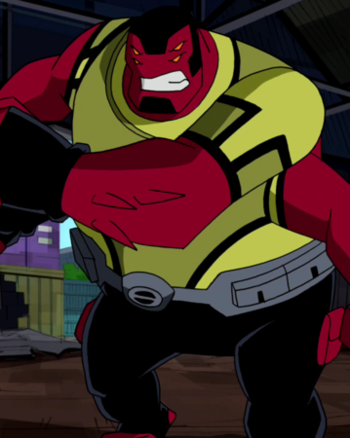 A short, out-of-shape Tetramand criminal who made his first appearance in the Alien Force video game. He's a cameo character in "Special Delivery" and later as The Mole in "Mud is Thicker Than Water".