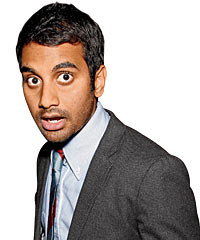 Aziz Ismail Ansari (born February 23, 1983 in Columbia, South Carolina) is an Indian-American actor, comedian, writer, director and producer most known for his role as Tom Haverford on Parks and Recreation and as the creator and star of the Netflix original series Master of None.

Ansari began performing stand-up comedy in the early 2000s after moving to New York City to study marketing at NYU. His act focuses a lot on mundane everyday activities, pop culture, technology, and his experiences around celebrities.

Apart from Parks, his TV work also consisted of co-creating and starring in Human Giant, which ran for two seasons on MTV, and appearing in several episodes of Scrubs. In 2009, he played a small role as an obnoxious stand-up comedian named Randy in Judd Apatow's Funny People, and subsequently signed a deal with Apatow to write and star in three new movies. In 2011, Ansari starred in the comedy film 30 Minutes or Less.

For his work on Master of None, Ansari received seven Emmy Award nominations, including Outstanding Lead Actor in a Comedy Series — making him the first person of South Asian descent to be nominated in any Lead Actor category. He won two Emmys for writing each of the series' two seasons.

On the night of January 13, 2018, the website Babe.net published an article in which a photographer accused Ansari of sexually assaulting her after a date

, putting his career as a comedian in jeopardy. The description of the alleged incident, however, subsequently led to discussions on what is really considered sexual assault. While he did briefly retreat from the public eye, Ansari resumed performing stand-up comedy in May of that year.