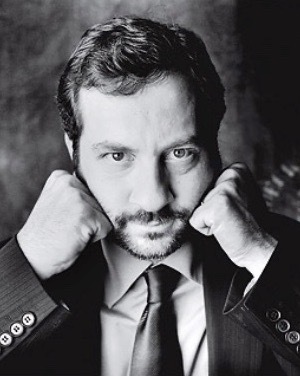 Genres:
"I always felt as a kid that I was underappreciated, invisible or weird, but I've always secretly thought people would one day appreciate what is different about me. I'm always putting that message out there."
Advertisement:

Prior to his film and television career, Apatow did stand-up comedy and worked as a joke writer for performers including Jeff Dunham, who claims he paid Apatow "a measly $50 apiece" for his work. He was responsible for shows like Undeclared and Freaks and Geeks, as well as a notorious Flame War with former friend and fellow The Ben Stiller Show alumnus Mark Brazill (creator of That '70s Show). His career really exploded, however, after the runaway success of The 40-Year-Old Virgin, to the point where it's hard to find a mainstream comedy from the next ten years that isn't in some way associated with him or influenced by his brand of comedy. As John Hughes was to The '80s, Apatow is to the second half of the Turn of the Millennium.

Apatow is inordinately fond of improv (full scenes are often entirely improvised by the cast), profanity, stoner humor, sex jokes, and gratuitous nudity (male nudity, more often than not). His characters are usually average Joes who learn to connect with either women or their male buddies, leading some people to call these films romantic comedies for men — "bromances," if you will. He has occasionally been accused of sexism, towards both women (as shown by Katherine Heigl's complaints regarding the portrayal of her character in Knocked Up) and men. Often for the same film.

He is married to actress Leslie Mann. Both of their children, Maude and Iris, are actresses (they've been in his films multiple times).

Directed and produced Only

He tends to work with many of the same actors many of whom starred in his earlier shows, a who's who of comedy that includes: