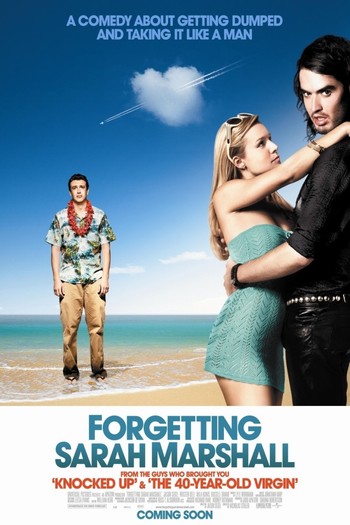 Forgetting Sarah Marshall is a 2008 Romantic Comedy written by (and starring) Jason Segel, co-produced by Judd Apatow, and directed by Nicholas Stoller.

Segel is Peter Bretter, a musician who has been dumped by the titular Ms. Marshall (Kristen Bell), his TV star girlfriend. After a string of one-night stands, Peter decided to go on vacation to Hawaii to forget, erm, well, you know. Unfortunately for Peter—but fortunately for us the viewers—Sarah is staying at the same resort with her new flame, British Rock Star Aldous Snow (Russell Brand). Peter makes new friends, and starts to date Rachel (Mila Kunis), a receptionist at the resort. Schadenfreude happens. Hilarity Ensues.

Two years later it spawned a Spin-Off, Get Him to the Greek, featuring Brand reprising his Aldous Snow character from this movie alongside Jonah Hill, who, rather confusingly, does not reprise his role from this movie.