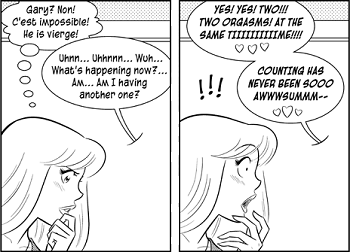 Evidently not completely impossible.
Elliot: J.D., I knew you were faking it because at the end you didn't say "bombs away."
J.D.: How could I forget my sexiest move?
— Scrubs, "Her Story II"
Advertisement:

Calling Your Orgasms is the tendency of any character in a sex scene to announce the moment at which they orgasm. This announcement, while usually addressed to the person's partner, may also sometimes be addressed to Jesus, God, the deity of one's choice, or that other person they desperately wish was there instead. This is frequently done in works in lieu of actually showing the sex act itself as the sounds alone are less explicit than the visuals. But it's also ubiquitous in pornography (in which it often serves a practical purpose as performers—in particular men—often say this to alert the camera operator, and the person's partner, to get into position for the scene's, ahem, climax).

Frequently this trope is parodied or Played for Comedy especially in the less graphic versions of it. In fact, usually someone calling an orgasm in a mainstream film or TV episode is played for laughs or purposeful exaggeration, though over time TV and movie productions have grown more explicit and the trope is more commonly played straight now.

The sexual equivalent of That Makes Me Feel Angry. May or may not invoke Say My Name. See also Calling Your Attacks, The Immodest Orgasm, The Grunting Orgasm and IKEA Erotica.

For many people this can be Truth in Television (perhaps as a result of its frequent use in media, or especially in cases such as oral sex, in order to warn the partner to get out of the way of the, ah, incoming mess) but, as with all sexual tropes, it does not apply to everyone.

Stewie and Brian keep running into Cleveland and Brian's ex-girlfriend Carolyn having sex wherever they go, with Cleveland punctuating his orgasms with a deadpan "And boom goes the dynamite".

Stewie and Brian keep running into Cleveland and Brian's ex-girlfriend Carolyn having sex wherever they go, with Cleveland punctuating his orgasms with a deadpan "And boom goes the dynamite".