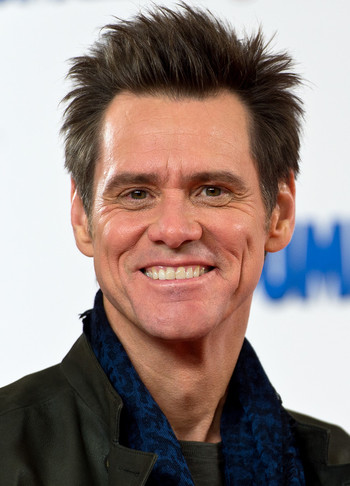 A colorful Canadian-born actor with a face for molding, James Eugene Carrey (born January 17, 1962) launched his career as a comic in the late 1970s as a celebrity impressionist. He moved into acting in the mid-1980s, most notably in the short-lived sitcom The Duck Factory, but — after expanding his stage act beyond impressions by adding eccentric observational humor and commentary — came to attention as a cast member on In Living Color! Serving as the cast's Token White male, he more than managed to hold his own with several popular sketch characters, including mannish bodybuilder Vera DeMilo, Fire Marshal Bill Burns — a masochistic, cartoonishly destructive fire marshal hired to teach people fire safety (with disastrous results) whether or not he's somewhere where fire safety is needed — and Grandpa Jack, the depressed, divorced, alcoholic host of The Dysfunctional Home Show. Some notable celebrity impressions he did for the show include Paul Reubens (as Pee-Wee Herman), Vanilla Ice, Tom Hanks (in a parody of the movie Philadelphia), Sgt. Stacy Koon (from the infamous Rodney King beating trial in the early 1990s), George H. W. Bush, Bill Clinton, and Michael Bolton.

When the small-scale Ace Ventura: Pet Detective arrived on movie screens in early 1994, it was roasted by critics but proved to be a surprisingly big hit. As it happened, he did two other hit movies that year (The Mask and Dumb and Dumber) and was soon an A-list performer: the first big film comedy star of the 1990s.

He has played many classic characters, and his involvement in a movie will often be a success — so successful, the subsequent films and series usually go down from his absence, as he rarely makes sequels to his own films. He developed a distaste for playing the same characters again and again on In Living Color!; the only reason he did the Ace Ventura sequel was due to contract reasons, and so thoroughly detested working on it that he openly declared he would never do a sequel again. In 1995, he even turned down a $10 million paycheck—which would have set a record, at the time, for the highest sum ever offered to a single actor—to reprise his role as Stanley Ipkiss in The Mask 2. He held to this until 2014's Dumb and Dumber To, re-teaming with Jeff Daniels and the Farrelly brothers. (He was interested in reprising the role of Count Olaf for a sequel to A Series of Unfortunate Events, but the film did not do well enough at the box-office to warrant such.) He broke his rule again in 2022 by reprising his role of Dr. Ivo "Eggman" Robotnik for Sonic the Hedgehog 2.

Starting with The Truman Show, he made a transition to dramatic fare, with Eternal Sunshine of the Spotless Mind probably his most lauded serious role. It hasn't stopped him from appearing in goofy comedy though; nowadays he's well-respected for his total acting range as in the Showtime Dramedy Kidding, which ran two seasons. While not as popular as he was at his height in The '90s, his career has been surprisingly durable.

In his early days performing standup comedy, Carrey reportedly wrote himself a check for almost $1 million and promised himself that he would, one day, be worth enough to legally cash it (as his family struggled with money and was homeless for a good chunk of their lives after his father's saxophone shop went under). That promise was fulfilled soon after his performance in The Mask and Dumb and Dumber, though by that point, he had already earned several times more than the check itself was worth. When his father died, he put the check he wrote to himself in his father's casket.note Other stories contend he was more ambitious still, writing a $10 million check to himself when he was ten years old, postdated 1995. Either way, that hope also came to pass as true.

He's often dubbed by Mario Castañeda and Gerardo Reyero for Latin American Spanish releases of his films and by Emmanuel Curtil in French. In Japanese dubs, he's often voiced by Kōichi Yamadera.

Other works of note:

Jim Carrey is clearly having the time of his life bringing Robotnik to the big screen, combining his penchant for loud and manic characters with the already bombastic nature of the source character. Whether it's him dancing while preparing his vehicles, to screaming about his love of lattes with steamed Austrian goat milk, his portrayal is definitely one to be remembered. Then there's the moment Robotnik has a Freak Out, complete with exaggerated movements, after Sonic destroys his robots on the highway.

Jim Carrey is clearly having the time of his life bringing Robotnik to the big screen, combining his penchant for loud and manic characters with the already bombastic nature of the source character. Whether it's him dancing while preparing his vehicles, to screaming about his love of lattes with steamed Austrian goat milk, his portrayal is definitely one to be remembered. Then there's the moment Robotnik has a Freak Out, complete with exaggerated movements, after Sonic destroys his robots on the highway.