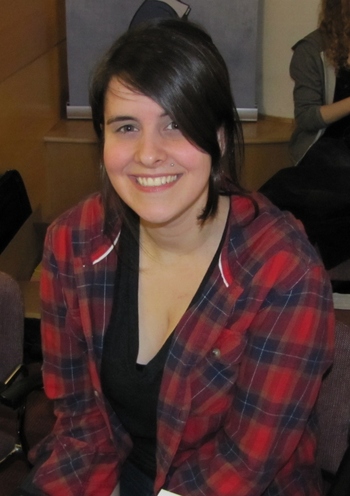 Emily Carroll is an artist who writes horror comics.

Her style is highly variable, shifting to fit the mood of the scene and makes use of vibrant colors as much as it does creepy monochrome. In certain stories, animated gif panels serve as Jump Scares. The comics are variously labeled as fairy tales, romance, or ghost stories, but nearly all of them involve elements of the macabre and terrifying. Bad dreams are a recurring motif, particularly things not staying inside them, and she's written comics about her own strange nightmares.

Things she has made/worked on include:

The Prince and the Sea

The prince of a forest kingdom and a mermaid from an underwater land fall in love. Written as a poem.

The tale of a woman who lost her daughter, and then her husband.

The Hole the Fox Did Make

A girl named Regan dreams about her unknown father and develops a fascination with the creek near her home.

When the Darkness Presses

A young woman looks after a house for the summer and finds herself having recurring nightmares.

All Along the Wall

A bored girl at a party requests a ghost story from one of the guests. A prequel to "The Nesting Place" from her book Through the Woods.

Two girls discover a diorama behind a house.

Some Other Animal's Meat

A woman feels disconnected from her body.