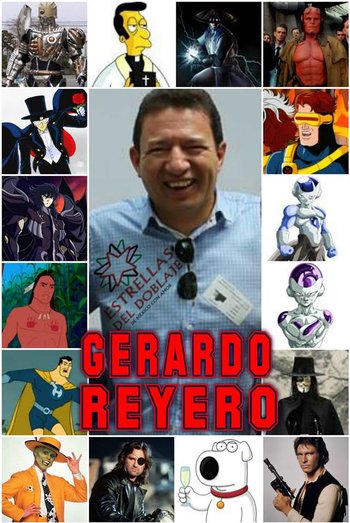 Gerardo Reyero (in the middle) and some of his roles.
"¡Essss magnífico!" Explanation Ssssmokin'!
Advertisement:

Gerardo Reyero Muñoz (born October 2, 1965), despite being a bass, is THE Badass Baritone in Mexican dubbing. His beginnings in anime dubbing were rather... rocky, as him taking over the role of Mamoru "Tuxedo Mask" Chiba from Sailor Moon R onwards gave the fandom mixed reactions: some found the huge Vocal Dissonance jarring compared with the Tenor Boy-like original VA (Genaro Vásquez), whereas others thought that his acting skills were good enough to compensate the difference. However, dubbing fans completely got his back when he took up his most popular role as a whole: Frieza (or as he's known in the dub, Freezer) of Dragon Ball Z.

As for typecasting, he often goes by The Stoic, a member of a villain squad (usually the Big Bad himself or The Brute), a Reasonable Authority Figure or the Team Dad. But he's not uncapable of Playing Against Type, as proved by him voicing Hana from Tokyo Godfathers and Guy from Naruto.

His characters seem to have Relationship Voice Actor deals with those played by either Mario Castañeda or René García.