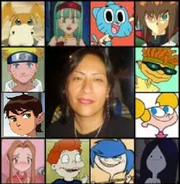 Isabel Martiñón and some of her roles
Advertisement:

Her star-defining role was voicing Ben Tennyson in the original Ben 10 (she was mostly known for voicing girly girls and small children in the nineties). After Ben 10, her second well-known role was Naruto Uzumaki and later Gumball Waterson.

She is known for her androgynous acting voice that works with both young male and female characters.