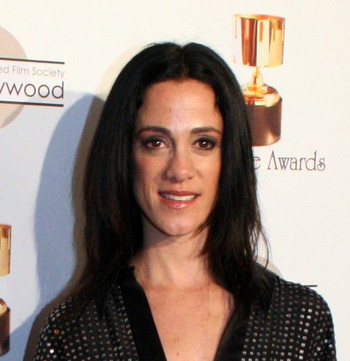 "Do I look like a strategy guide? In case you haven't noticed, THIS ISN'T THE ASK AUNTIE FUTTERMAN HOUR!"
Advertisement:

Nika Futterman (born October 25, 1969 in New York City, New York) is an American voice actor who possesses a very distinct, raspy voice. It usually causes her to wind up playing either boys (like Miguel in Maya & Miguel and Adam Lyon in My Gym Partner's a Monkey) or tomboys (like Mike in Mike, Lu & Og or Smellerbee in Avatar: The Last Airbender). Next to Candi Milo, she's the most prominent voice actor for Latina characters, such as Lola Caricola in CatDog or Zita Flores in Kim Possible. Capable of doing very feminine voices, such as Celsius in Tales of Symphonia and Velvet Velour in Vampire: The Masquerade - Bloodlines, as well as sinister-sounding ones, like that of Asajj Ventress on Star Wars: The Clone Wars and Silhouette on Destroy All Humans!.