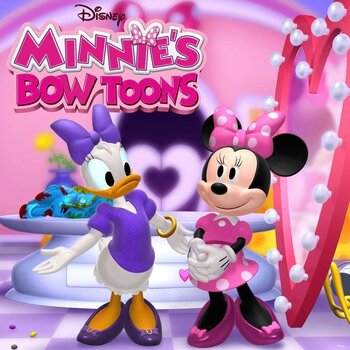 "Welcome to my new bow-tique, where each and every bow's unique..."
Minnie's Bow-Toons are a Spin-Off from Mickey Mouse Clubhouse and the specific episode "Minnie's Bow-tique". They debuted on November 14, 2011, in the United States and November 18 in the United Kingdom in celebration of Minnie's (and Mickey's, though the focus is on Minnie for once) birthday on the 18th. They are a miniseries of in-between shorts directly after the main shows, usually at 8:55 a.m. every day on Disney Junior.
Advertisement:

was eventually announced that new episodes would return in 2021 after a 5 year hiatus. The show is retooled a bit, and has Minnie, Daisy, and Cuckoo Loca running the Polka Dot Party Palace.

Tropes that apply to this show: