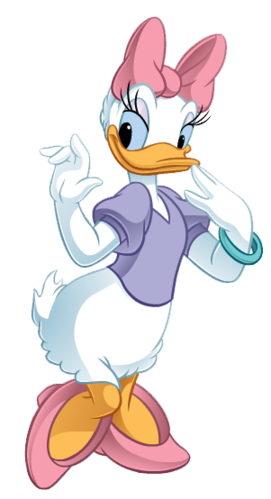 Daisy Duck is the girlfriend of Donald Duck, best friend of Minnie Mouse, and is a recurring character in Disney media. She first appeared in the 1940 short Mr. Duck Steps Out. She was preceded by Donna Duck in Don Donald, but they usually aren't considered the same character.

The specifics of Daisy's personality differ from work to work; however, her core is usually the same. Though she loves her boyfriend Donald, Daisy is well-aware of his flaws and vices. Daisy is constantly arguing with Donald and frequently tries to fix his flaws. Though she'll often berate Donald for his temper, Daisy has just as big of a temper as him. Daisy serves as a foil to Minnie. While Minnie is demure and prefers to dress simple, Daisy is very outspoken and fashion-savvy. Minnie and Daisy get along for the most part, but Daisy's bombastic personality can make her an annoyance.

Daisy appeared sparingly throughout the 1940s, although in 1947 she was the protagonist of Donald's Dilemma. Daisy had several more appearances until the mid-50s. She was retired (in theatrical form at least) until she was revived in the '80s. Since then, Daisy Duck has become a core member of the Classic Disney Shorts cast.

Tropes that apply to Daisy: