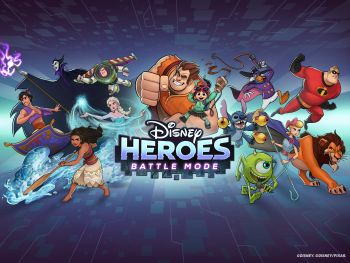 Disney Heroes: Battle Mode is a crossover mobile auto-brawler RPG developed by PerBlue for iOS and Android devices, soft-launched on February 24, 2018, and released worldwide on May 17, 2018.

The plot spins out of Ralph Breaks the Internet, as, during their travels online, Ralph and Vanellope begin exploring a game called Disney Heroes. Inside they found a large virtual city, but something is very wrong and it was crawling with strange creatures called Creeps. They soon find Elastigirl, who doesn't realize she's in a game but does know that her family is in danger, somehow corrupted by the Creeps. Teaming together along with Elastigirl's friend Frozone and a naked hippie yak-guy, the group sets out to free their friends and other allies, and to get to the bottom of just what's going on in the city.

Characters
In the order that franchises were added, followed by characters:
Advertisement: