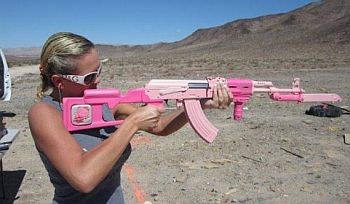 Strong enough for a man, but made for a woman!
"I'm always in a pink mood!"
— Barbie, Barbie: Life in the Dreamhouse episode "The Upgradening"
Advertisement:

For many modern cultures, the color pink has become the color meaning femininity, in all its forms. This means that the more feminine a woman is the more likely she is to wear pink in fiction. It's also why it's thought girls appreciate pink things more than other colors.

The form of the pink is best done with elegant clothing (like the walls on her bedroom and the furniture), but even something "manly" being colored pink would count for this trope. Heck, even a dress that's not normally pink, like a Fairytale Wedding Dress, could be either colored pink (for being non-traditional, but still feminine), or have pink trimmings (usually in the form of a bouquet with pink flowers). A woman wearing sexy pink clothes can look naughty and nice at the same time.

This trope is Newer Than They Think. Pink is a shade of red, and red (being the color of blood) was considered masculine (although this hasn't always been the case; though pink as a feminine colour is recent, a Lady in Red is Older Than Dirt). Blue was the feminine hue (because it was associated with the Virgin Mary), and still is in some parts of the world.

The strong association of pink and a girly sort of womanhood makes this a delicate trope to navigate. For instance, a Tomboy will refuse to wear pink and her opposite, the Girly Girl, will insist on it. A favorite twist is to bring the "feminine and delicate" connotations into hard contrast with an Action Girl's rough, tough, and indelicate career. Expect the Girly Bruiser to wear pink while kicking ass. Real Men Wear Pink also plays on the contrast (often humorous) which comes up when a "manly" man is shown to enjoy "girly" pursuits.

By the way, this can include any shade of pink, even those that cross with other colors (like fuchsia, a purple and pink color). This is why the Graceful Ladies Like Purple trope exists.

A Sister Trope to Graceful Ladies Like Purple (and can overlap with colors like fuchsia), True Blue Femininity.