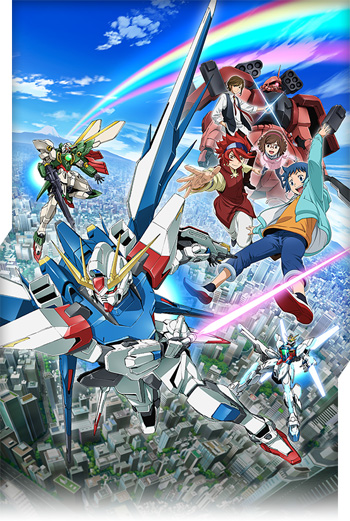 "Gundam plastic models... Gunpla. Building them or fighting them, it all depends on you. Unlike the Mobile Suit Gundam story, we're not in a state of war, and we don't have to put our lives on the line. It's just played for pleasure. But... No, for that very reason... People can be enthralled by Gunpla and Gunpla Battle. Because it's a game, they can take it seriously!"
— Mr. Ral
Advertisement:

In the near future, new technology has been invented that allows people to animate and control plastic models in sporting competitions known as "Gunpla Battles." The protagonist, Sei Iori, hopes to one day make it into the Gunpla Battle world championships using his custom model "Build Strike Gundam." Unfortunately, despite being an excellent model builder, he's a terrible pilot. Sei's luck turns around, however, when he meets a mysterious boy with incredible piloting skills named Reiji. Together, they set off to realize Sei's dream To Be a Master.

set 3 years after the events of the original series, and Gundam Build Fighters Battlogue, set at random points within the same continuity (covering Try), available online from August 2017.