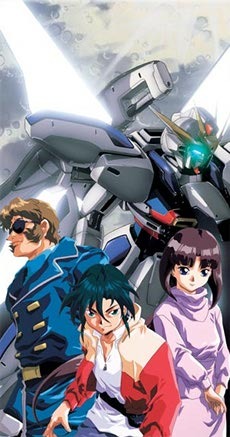 Is the Moon Out?
...the Moon will always be there...
— Narrator
Advertisement:

After War Gundam X (Kidou Shinseiki Gundam X, lit. "Mobile New Century Gundam X") is the seventh Gundam TV series and one of the shortest running installments in the franchise.

A war breaks out between the Earth Federation and the Space Colonies (wait, this sounds familiar...). The war escalates rapidly and culminates in a Mass Colony Drop that kills off 99% of the Earth and colonies' human population. Fifteen years later (AW 0015), the Earth has begun to recover from this tragic war. A group of wasteland scavengers, known as "Vultures", finds itself on a hunt to protect Newtypes, but after group member Garrod Ran saves a young female Newtype, they stumble upon a "fifteen-year-old nightmare": the Gundam X. This discovery sets off a chain of events that threatens humanity with extinction once again...

While scheduled for forty-nine episodes, Gundam X ended up with only thirty-nine due to executive meddling. Even though the show's final arc played out over a compressed three episodes (instead of the planned twelve episodes), it still wrapped up with a coherent (albeit rushed) ending. The show also maintained an optimistic tone despite the subject matter.

The manga sequel, Under the Moonlight, became quite popular and ran for several years; appearances by the show's Gundams and cast in the Super Robot Wars games also helped it gain more popularity in (ironically) the new century, and it's been a particular mainstay of SRW Z.

After War Gundam X contains examples of the following tropes:

The Moon will always be there.