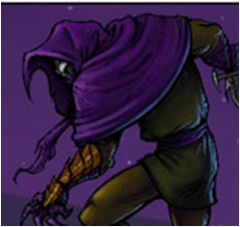 And he's the good guy.
Advertisement:

is a high fantasy webcomic about magic and The Corruption it invariably brings.

In the land of Nirhal, enchantment is an art that tempts with promises of power, wealth and miracles, but in the end only corrupts and destroys. 500 years ago, it took a war to save Nirhal from its influence. Now, in spite of the lessons of the past, there are signs that the corruption that nearly destroyed the kingdom is beginning to reemerge.

. It updates on Thursdays.

Trope examples in Shadows of Enchantment: