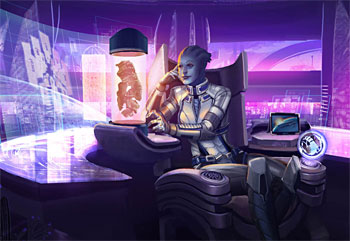 "Give me ten minutes, and I could start a war."
"Whether you're a coke dealer, a thief, an arms dealer, or a spy, you need someone to clean your money, which makes a good money launderer the closest thing you can get to a Yellow Pages for criminals."
— Burn Notice

This is the person who always seems to have the dirt on everybody. The person who runs an information-gathering system, with a network of informers.

The Knowledge Broker has a web of contacts stretching into various organizations, industries, and government agencies, and always seems to know what's going on. Sometimes the Knowledge Broker seem nearly omniscient. He/she always seems to have just the right tidbit of information for whoever is willing to pay their price. For the most part, he remains impartial despite his vast influence, and most people know to stay on his good (or at least indifferent) side.

This is a person who is not mysterious (Compare Mysterious Informant). Everybody knows that when you want information, you go talk to this person. Usually of dubious morality. Often your innocent hero has a buddy who grew up on the wrong side of the tracks, and knows that they ought to start by talking to "Big Eddie" or whoever, cause he always "knows anything that goes down."

Sometimes the source of information is more upscale in appearance, in which case they are probably also The Barnum. They usually want something from the hero before they hand out the information (unless they owe the Hero a favor, or have a crush on him). Often they'll want nothing more than cash, but sometimes they want the Hero to run an errand for them. Or they may trade information for information. If there is romantic subtext, she might ask the Hero to be her escort somewhere — always a good choice for drama when the hero is looking for information about the kidnapping of his love interest. Obviously saving his true love justifies cheating on his true love — or does it?

Many times this character is relegated to a position as a Plot Device. When the Knowledge Broker is given Character Development, expect him to have a traumatizing past and/or an old relationship with one of the protagonists. When acting as a contact for the heroes, expect the Knowledge Broker to supply the catalyst to propel the story forward. If the heroes get stuck, expect him to suddenly come up with a new lead. If he's mostly in it for the money, expect either a Face–Heel Turn or a Heel–Face Revolving Door that may one day make someone put a gun to his head. If he's less-than-impartial towards the main character, expect him to deny payment, with an excuse like "I owed you a favor anyway." Likely to Default to Good (if only because the good side winning would keep them in business); rarely, if ever, is this character working strictly for the antagonist. When the compiler of information isn't impartial at all and instead serves an organization, they are The Spymaster.

If the contact is a recurring character and the Knowledge Broker and the protagonist are different genders (or not), expect romantic subtext.

Real Life information brokers tend to be consultants who work in market research, though there are exceptions.