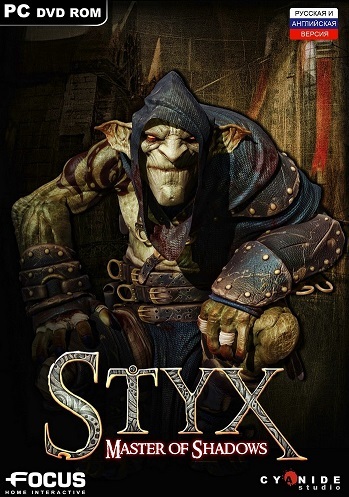 Become the Master of Infiltration.
"I remember... I was born in a dried up lake-bed. There was a big dead tree and dozens of my kind crawling around, like rats. But I wasn't like them. I was a rat of another kind. My vision blurred... I don't know what happened before that. I can remember only one thing. A name... Styx. It was the only thing I could think of. I often dream of this place at night. Well, more like a nightmare. I see myself and I am - everywhere."
— The one-and-only Styx
Advertisement:

Styx: Master of Shadows is a Stealth-Based Game developed by Cyanide Studio and published by Focus Home Interactive for PC, PlayStation 4 and Xbox One, released on October 7, 2014. The game is a spin-off/prequel to Of Orcs and Men, focusing on Styx as he steals a magical artifact from humans. As the very first of all the Goblins, he’s a master in the arts of stealth, thievery, and murder. The depths of the miles-high Tower of Akenash, where Humans and Elves hide and protect the Tree, the source of the Amber, are the best chance Styx has of quickly amassing a small fortune and, perhaps, discover more about his true origins along the way.

After a relative success, Cyanide released a sequel in early 2017, Styx: Shards of Darkness, promising "more ambition", a "bigger budget", and a "new engine".