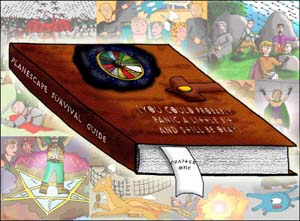 You could probably panic a little bit and still be okay.
"This is Planescape Survival Guide, a rousing tale of grand heroism and gallant deeds in a— okay, you got me. They're mostly incompetent. But! They are trying to save the Multiverse from utter destruction."
— From the FAQ
Advertisement:

, written and drawn by Travers "Swiftbow" Jordan, in a nutshell.

The "they" in the above quote is actually referring to two separate groups - one an unfortunate band of Faerunian adventurers with a tendency to leap before they look, the other a newly-partnered team of planar travelers swept off their feet into Multiversal politics... and deeper plots. Along the way there's a bunch of evil dark dwarves and a cult of black-robed madmen trying to bring about The End Of The Multiverse As We Know It and a team of followers of the God of Murder in it for the killin' tagging along for the ride. Oh yeah, and there's a owl narrator, a halfling who can't stop talking long enough to register reality, and a blue beholder with a secret he doesn't even know somewhere along the way.

The art isn't the greatest out there, and the update schedule makes "erratic" look like an understatement, but (most of the time) the story makes up for it. Although he has been doing better lately. See Schedule Slip below.

As can be inferred from the title, it's based on the D&D Campaign Setting Planescape, and homages The Hitchhiker's Guide to the Galaxy.