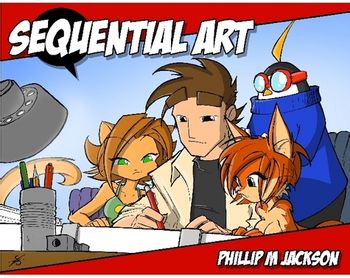 Before you click...  The author produces a lot of pornographic works and other fanservicey stuff (especially drawings of Amazonian Beauties), so the site is NSFW. is a webcomic drawn by Phillip M. Jackson (a.k.a. Jolly Jack) about a group of unlikely housemates. Art is a chronically frustrated graphic designer (and the only human living in the house); Kat, a cat girl, is a fun-loving photographer; Pip, a penguin, is a stereotypical video-game geek who makes a living buying and selling items online, and Scarlet is a naïve and energetic squirrel girl whose erratic behaviour and short attention span mask her true intellect. Over time the household is expanded with Kat's adoption of a non-anthropomorphic platypus named Leonard, a mysterious infestation of Denizens, and the rescue of Scarlet's sisters(?) Amber, Jade and Violet.

Sequential Art veers between cozy Slice of Life moments and Art's role as a Cosmic Plaything. Sometimes life is fairly ordinary — Christmas shopping, computer problems, and things like that. Sometimes life is a little surreal... Art may end up playing the Realm of Lorecraft boardgame against a squirrel hivemind. And surprisingly frequently, life gets extremely surreal, such as the housemates' brief involvement in the secret global struggle between retardium-harvesting aliens and the merman who engineered the terrible secret behind 3D movies. No, really. Also features occasional appearances by the small, wisecracking hamster who apparently draws the strip.