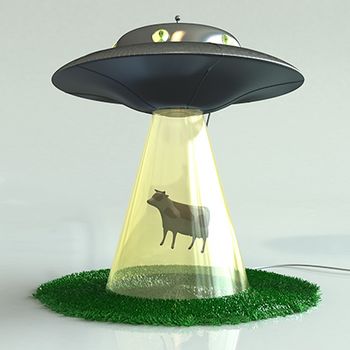 If you think this is weird, you should have seen the Alien Autopsy novelty lamp...
"Why would alien beings travel light years through space in order to play doctor on cattle?"
— Agent Dana Scully, The X-Files, "Eve"
Advertisement:

When UFOs fly over a farm, it always seems that the first thing they do is to beam up the farmer's cows with their Tractor Beam. Abduction accounts being what they are, you'd think aliens would be more interested in scientists or political leaders than farmers, but where else would you test a tractor beam?

This is actually a great example of a Dead Unicorn Trope. Like Anal Probing, "Cattle Abductions" were never really suspected alien encounters in the first place; but they've become popular as a sort of satirical combination of cattle-mutilation stories (compare the similar urban legend of el chupacabras) and Alien Abduction stories. It's also a useful trope for designating aliens that are up to no good, but in a comedic or nonthreatening way (the sight gag of a mooing cow being tractor-beamed up into a flying saucer). Sometimes it's even played as a kind of obsessive-compulsive disorder: they just can't resist beaming the creature up.

Not to Be Confused with Aliens Steal Cable — although if they've been watching too many Westerns, that may be where they got the idea.