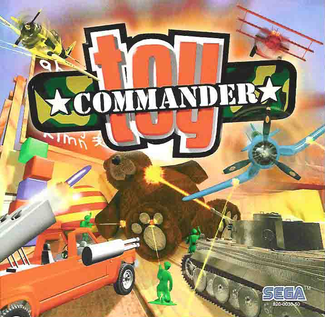 Andy, a young kid with a big imagination, finds out one day that some of his toys are sick and tired of being played with and tossed summarily aside later. So, they decide to revolt. Their leader is Huggy Bear, Andy's favorite toy bear, and he and his generals have taken over the house, with each "general" ruling over a certain room. It is up to Andy and his new military toys to stop the rebellion (by completing the missions for each room and defeating each general), take down Huggy Bear, reclaim the house, and become Toy Commander!

Notably, the game had an entirely separate level not present in the main game as a special demo: Christmas Surprise, where the objective is to help Santa find and deposit five presents under Andy's family's Christmas tree.

Had a small stand-alone expansion called Toy Racer which, as the name suggests, was a racing game with the ability to play online (still a big deal for consoles when originally released).