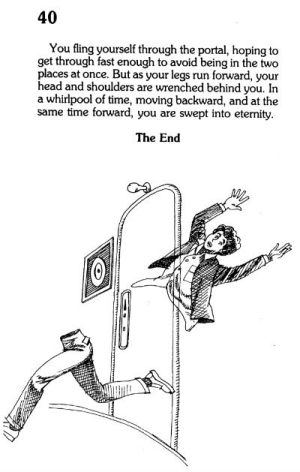 Ed: You put something inside the cylinder of wormholes, turn them on for a fraction of a second, turn them off again... what have you got?
Sam: ...The world's most ludicrously advanced bread-slicer?
— Ed stories

Classically and simply, teleportation is done on an object basis. Distinct items are sent through in their entirety. However, it is more realistic, and easier to calculate, to just send through anything within a certain area, or use a portal through which anything on one side is in one place and anything through is in another.

However, these can lead to subversions of the classic teleportation concept: if only an area is teleported, it's possible for this area to not contain an object in its entirety. And if a portal that leads to one place suddenly collapses or deactivates, anything currently in the portal will need to be acted upon. One solution is to distinguish distinct objects and then handle where they stay or go on an individual basis. The most common result, however, is that only the portion of the object that was in the teleport area will teleport, while the rest stays put, resulting in a portal cut. If the edges of a portal are not guarded, a similar effect can be reached if only part of the object goes through the portal.

The opposite of a Tele-Frag (but no less deadly). See also Teleporter Accident, for more general mishaps. A No Flow Portal may be designed to have this sort of effect on the unwary. For creating portals by physically cutting the fabric of space, see Dimensional Cutter.

50 Ways To Die in Minecraft

50 Ways To Die in Minecraft