Series / Tales from the Darkside 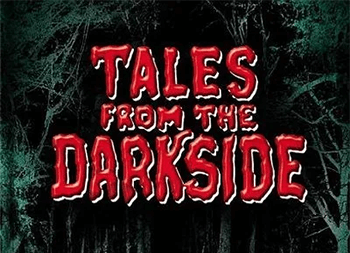 "Man lives in the sunlit world of what he believes to be reality.
But, there is, unseen by most, an underworld —
a place that is just as real, but not as brightly lit... A DARKSIDE."
— Opening Narration
Advertisement:

Tales from the Darkside is an anthology TV series from The '80s produced by George A. Romero. Similar to The Twilight Zone, Rod Serling's Night Gallery, The Outer Limits and Tales from the Crypt, each episode was an individual short story that ended with a plot twist. Unlike these other series, Tales from the Darkside centered mostly on horror stories. However, some episodes would more likely be considered science fiction or fantasy-based, and other episodes were more comical and lighthearted in tone. It's also known for its Cruel Twist Endings.

On February 21, 2016 the plans for a television reboot of the series were adapted to a four issue comic book miniseries authored by Joe Hill, illustreated by Gabriel Rodriguez and published by IDW; the first issue of which was released in June. The comic depicted an anthology of supernaturally ironic horror stories, much like the series, only this time loosely connected by the presence of a Reality Warper with unstable powers and a split personality. The second and third issues of the series detailed his backstory as world-building. While only slated for four issues, both Hill and IDW were open to expanding into a regular comic series if it was well received. It was not.

"The Darkside is always there — waiting for us to enter, waiting to enter us. Until next time, try to enjoy the daylight."