What Kind of Lame Power Is Heart, Anyway? 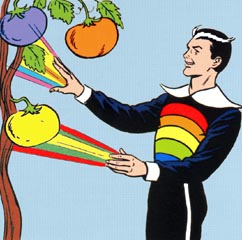 He's the best there is at what he does, if that's any consolation.
"Heart!? Heart!? They get fire, wind, and water, and I get fucking heart!? What a ripoff! Why can't I get any flashy powers? Heart? Are you kidding me!? What a fucking coup! I mean, you can't do anything with heart. What, you make people feel better? Who gives a shit!? I mean, this kid totally got ripped off."
— The Nostalgia Critic on Ma-ti from Captain Planet and the Planeteers
Advertisement:

This refers to a special ability of someone on a team such as a Five-Man Band who is so specialized as to seem useless in most situations. Usually, it's because the ability has no direct combat applications. Even if the ability sounds cool on paper, it can be lame in practice, particularly when 1) the power is hard to control, 2) the power's activation/requirement is ridiculously complex and/or the situation where it would be effective rarely comes up (see This Looks Like a Job for Aquaman when it does), 3) the user — who normally isn't lame — is facing a problem or is in a situation that their powers can't solve, 4) the user lacks the ingenuity and creativity to use it effectively, 5) the power has a big tradeoff such that the user cannot use it too often without endangering themselves, 6) the power is simply too limited to be useful.

Good writers can make this work for a character. Their power, such as it is, is not the real reason they're in the group. Some characters end up being The Heart (the team's social and moral compass), The Face (diplomat and spokesperson), The Smart Guy, or the Badass Normal. Often, said character is The Captain — superpowers would be just a tiny bonus to his real ability: leadership. The Captain tends to be specifically written to have no special abilities, in fact.

Unfortunately, fiction tends to favor the badass. Even if their power difference is no fault of the character himself, they will be sidelined in favor of more interesting characters and eventually people will wonder why they are on the team at all. They may even turn into The Scrappy.

There are a number of ways to fix this. If the character still seems ridiculously underpowered, they can still be Rescued from the Scrappy Heap by giving them additional powers or responsibilities. A common method is to have the character "evolve" to a higher power level. Weak, but Skilled characters might take advantage of the Required Secondary Powers. Maybe there ARE more potential uses for this power, it's just that the writers have somehow ignored them this far. Sometimes the character will uncover a devastating new use and become the dreaded Lethal Joke Character. Some may try empowering themselves in the same way normal people would (because they're considered as good as Muggles): either by developing mundane combat skills or by using technology or magic trinkets.

Maybe there's a trade-off; for instance, powerful beings tend to look freaky, while those with more subtle powers look normal and are better able to deal with mundane society. The easiest device is to just crank out a good old Plot Tailored to the Party, so that the character can make his seemingly useless superpower seem useful. In fact, characters who do nothing but gripe about their uselessness in battle might be a sign of bad writing. Couldn't they just carry a gun?

Named for an Internet meme, itself referring to Ma-Ti's ring power in Captain Planet and the Planeteers. While the other team members could control the raw elements with visually impressive feats, he could just talk to animals with a Spider-Sense. No doubt it was useful — his telepathy bailed them out a lot, as did the ability to get nearby animals to help, and it seemed to ward off the Idiot Ball — but it lacked the total elemental "badass" quality of the others. Then there was the fact that the one Big Bad he bothered to use it on was invulnerable to its powers because "You have no heart!", and the other villains never merited an attempt, for some reason. Ironically, since his power involved a form of limited mind-control (humans are still animals), he probably could have been the most devastatingly powerful of all the Planeteers if he weren't a pacifist, something which the show itself acknowledged on at least one occasion. Plus it's hard (but not impossible) to have dramatic tension when the hero can just command the bad guys to shoot themselves in the head.

Often the result of overdoing Cast Speciation. Easier to take in a Heroes Unlimited series, where not every character has to be in every episode. For Video Games, compare Useless Useful Spell, Quirky Bard and Power-Up Letdown; see also Crippling Overspecialization.

Super Zeroes often suffer from this. If they won the Superpower Lottery and still have one of these powers, it's Flight, Strength, Heart. If he's suddenly in a situation where the power is useful all by itself, it's This Looks Like a Job for Aquaman. If he's able to hold his own in a fight through good old training and determination, he Fights Like a Normal. If a god holds a lame domain like the way this trope goes, they're Odd Job Gods.

For the (sometimes classified as elemental) power of Heart (or Love) itself, see The Power of Love and Heart Beat-Down. Compare The Team Normal and Story-Breaker Team-Up. Contrast Heart Is an Awesome Power and Lethal Harmless Powers when these abilities are used more... creatively. See also the Inverse Law of Complexity to Power, which states that the broader a power is the more potent it is (and which often isn't used at the same time as this trope).