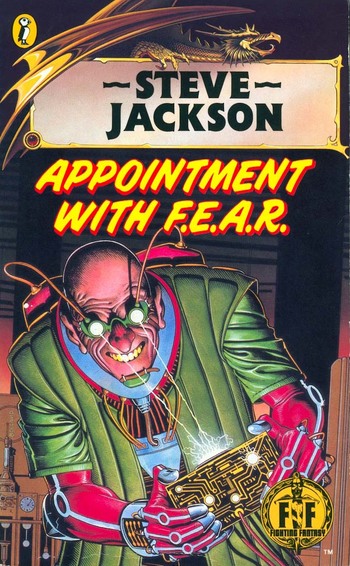 You will believe a man can fry your brains.
Advertisement:

Appointment with F.E.A.R. is a Gamebook by Steve Jackson in the Fighting Fantasy series. It is especially noteworthy for taking on a very different subject: instead of the usual Heroic Fantasy settings, it is set in a Comic Book-inspired superhero setting, though still in a place called "Titan" (Titan City, to be precise).

You are Jean Lafayette, a.k.a. The Silver Crusader, a masked vigilante who underwent a genetic experiment as you were born, and the effects started to show just as the scientists behind all this gave up on seeing the effects. Having either Super Strength (with Flight), Psychic Powers, being a Gadgeteer Genius or blasting Pure Energy, you embark on a fight against crime in the city of Titan!

Evil organization Federation of Euro-American Rebels, or F.E.A.R., led by the sinister Vladimir Utoshki a.k.a. the Titanium Cyborg, is bent on world domination. The Silver Crusader must stop F.E.A.R. the day their leaders are to meet, or else it might be The End of the World as We Know It.

The book is slightly longer than a normal Fighting Fantasy book with 440 references compared to the standard 400. A 200-reference sequel not written by Jackson but using the same rules, Deadline to Destruction, appeared in an edition of Warlock magazine.

In 2014, the book was adapted for an electronic format by Tin Man Games, and released on Steam, iOS and Android. This particular version of the game features a limited form of character name and appearance customization on top of the choice of superpowers originally in the book.

Appointment with F.E.A.R. provides examples of: