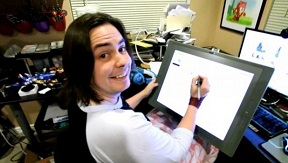 He's the video game boy!
"I did it. I accomplished my dreams and now I'm dead."
Advertisement:

His best known animated work is the Awesome Series, but he also has a huge following as a founding member of Game Grumps, the "Grump" to Dan Avidan (AKA Danny Sexbang of Ninja Sex Party)'s "Not-So-Grump." ("Not-So-Grump" was formerly Jon Jafari until he left to focus on his own work.) Hanson and NSP have collaborated to form the musical act Starbomb.

In 2013, Hanson married Suzy Berhow, another Internet personality. Aside from her own let's play channel KittyKatGaming, Berhow is a recurring guest on various Grumps series, including Steam Train, Table Flip, and the Valentine's Day special Date Grumps.

Arin is know for his boisterous on-screen personality that often shifts between ironic overconfidence, powerful rage and sudden self-loathing on Game Grumps, and his many strange and silly voices and character. Off-screen he is much more mellow and quiet, though this hasn't stopped many fans from demonizing Arin as thick-headed and deliberately frustrating.

Series Egoraptor has worked on (or been involved in):