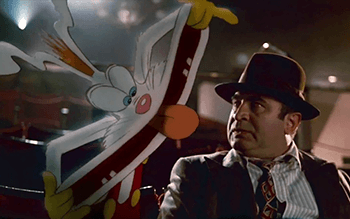 Why the long face?
"Any body suspended in space will remain in space until made aware of its situation. Daffy Duck steps off a cliff, expecting further pastureland. He loiters in midair, soliloquizing flippantly, until he chances to look down. At this point, the familiar principle of 32 feet per second takes over."
— First Law of Cartoon Thermodynamics

Animation Tropes, of course, occur in most Western cartoons of the classic era. Like any genre trope, they became consistent enough to be considered the "natural laws" of that setting.

Toon Physics hangs a lampshade on those tropes, by explicitly and consistently pointing out how creatures of ink and paint operate under different rules from those of flesh and blood, while coexisting in the same setting. Toons living in or visiting a flesh-and-blood world will still operate under their own unique laws of nature.

Humans visiting a cartoon world may operate according to the local laws — or may not. This doesn't have to be consistent even within a given work. In Who Framed Roger Rabbit, for example, Eddie experiences many Animation Tropes first hand — but his brother was killed by a falling piano (admittedly this may have been a real piano that was dropped by a toon; it was also presumably dropped outside of Toon Town, onto a normal human).

Seen in any Trapped in TV Land tale that includes a jaunt into a cartoon.

Contrast Refugee from TV Land and Real World Episode, where characters from a "fictional" milieu enter the "real" world and, more often than not, find that the world doesn't work the same way anymore.

Sister Trope to Artistic License – Physics, when things in the "real" world seemingly obey Toon Physics laws (ostensibly for the Rule of Cool).