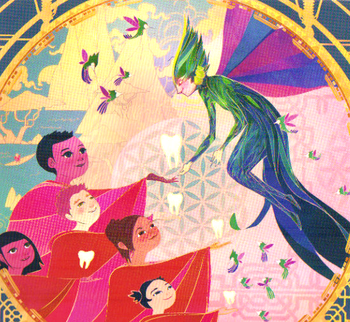 A contract as old as the invention of processed sugar.
Queen: You put the tooth under your pillow.
King: And the fairy leaves a little something behind.
— Little Princess, "I Want My Tooth"
Advertisement:

The tooth fairy is a popular fantasy figure among children. Their job is to collect the teeth that children lose and replace them with money (usually in the form of a coin of some sort).

Many versions of the Tooth Fairy in media appear as a friendly figure whose trade of teeth for money becomes a pleasant fixture of childhood. However (perhaps because teeth can feature in nasty scenes or as a throwback to less benevolent portrayals of fairies), some versions show up as darker characters more similar to the boogeyman.

In other countries, Spanish/Hispanic, French, and Italian cultures have a variation where it's a mouse that takes children's teeth and gives them gifts in exchange.

Compare Santa Claus, the Easter Bunny, and The Sandman, similar mythological figures who are often mentioned in the same breath.

Sub-Trope to Our Fairies Are Different.