Theatre / The Man Who Came to Dinner 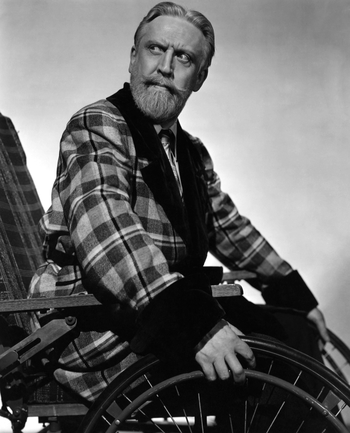 Sheridan Whiteside, a cranky, irascible New York author and critic, is conducting a nationwide lecture tour. As a publicity stunt two weeks before Christmas, he is the reluctant dinner guest of prominent Mesalia, Ohio businessman Ernest Stanley and family. While climbing the icy front steps at their house, Whiteside slips and breaks his hip, putting him in a wheelchair and forcing him to remain with the Stanleys over the holidays while he heals.

Whiteside quickly takes over the entire household, to the extreme annoyance of Mr. Stanley. His famous friends send their most "heartfelt condolences", and equipment is set up for him to broadcast his weekly radio program direct from the Stanleys' living room. Meanwhile, his trusted secretary, the eternally patient Maggie Cutler, falls in love with Bert Jefferson, editor of the local Mesalia newspaper. Whiteside, horrified at the prospect of losing his right-hand woman to marriage, decides he must put a stop to the romance. Bert has written a play, so Whiteside hits upon the idea of bringing theater actress Lorraine Sheldon to town, ostensibly to discuss starring in the play but really to seduce Bert away from Maggie.

The Film of the Play was released in 1942, directed by William Keighley and starring Monty Woolley as Whiteside, Bette Davis as Maggie, and Ann Sheridan as Lorraine. Woolley had originated the role on Broadway but was not the studio's first choice, being relatively unknown to film audiences at the time. John Barrymore read for the part, but his severe alcoholism kept him from getting the role (he died not long after). Orson Welles and Charles Laughton were also interested, but Woolley ended up reprising his role after all.

Future Inside the Actors Studio host James Lipton co-wrote a musical adaptation called Sherry! in 1967. Hallmark Hall of Fame aired a remake in 1972, starring Welles and updating the story for the television age. Meanwhile, the original play has been revived a number of times, including a 2000 production starring Nathan Lane.

Alternative Title(s): The Man Who Came To Dinner